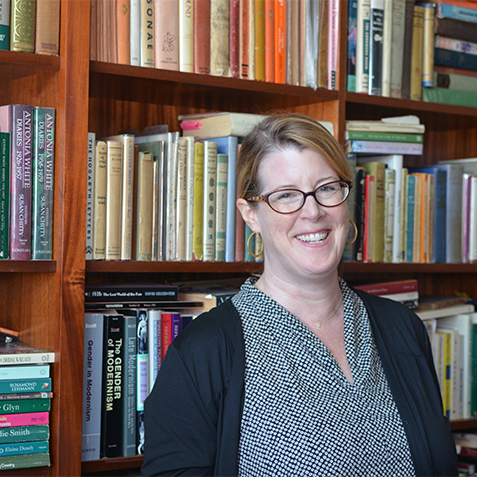 A Berkeley graduate herself, Catherine Hollis is no stranger to English R1B.

She's been teaching this R&C class for the past 22 years now! And while she has seen different types of students enter her classroom during that tenure, Hollis has kept one thing consistent: face-to-face discussions about the material at hand.

“I want my students to open up and talk to me about what they’re trying to say using any words necessary,” Hollis explains of her teaching style. “Once we figure out what they want to say and I know they’re excited about their ideas, then we can work on what each student needs individually. Sometimes it’s subject-verb agreement, sometimes it’s word choice. More often it’s a need for editing.

“My mandate is to teach them how to write to Berkeley standards,” she continues. “My unofficial mandate is to encourage them to have face-to-face conversations, so I try to reinforce the conversational arts. We talk about literature or writing and build on each other’s ideas by working in small groups. There are plenty of opportunities out there for students to engage in digital learning. I think English R1B as an appropriate place to focus on the art of conversation in a civilized and supportive way.”

An interesting conversation recently took place in her English R1B course. The class was reading Maxine Hong Kingston’s The Woman Warrior, which bears some resemblance to Disney’s Mulan blockbuster—a fan-favorite of her students. During their discussions, students would bring in movie clips to compare and contrast pop culture stereotypes between the novel and the film.

“Gosh, they were so good,” Hollis enthuses. “They were great at finding the right clip and projecting it into the classroom. It’s really good when I can step back and let them be the experts on popular culture and the use of digital media in the classroom. And then I learn from them.”

And that’s the beauty of the Fall Program for Freshmen (FPF). Resembling a small liberal arts college within the greater campus community, FPF allows freshmen to work one-on-one with their professors, who care deeply about their success. These students take all of their classes in the same building, creating an intimate and supportive community. Compare this to non-FPF freshmen, who are taking their classes in large auditoriums and being taught by GSIs who may not have the same bandwidth for personal attention as that from FPF instructors.

Another perk that keeps Hollis coming back to teach at FPF is the interdisciplinary cross-over that happens so often during class. “With the students in my class, an idea will come up and they’ll say, ‘We just talked about that in Poli Sci.’ And several of my students will have been in that class so they can start a conversation about that idea. The students in my class aren’t English majors; they’re from every major and I’ve got to find something that they’re interested in. So if they’re more interested in Poli Sci or biology, they can pull in ideas from those majors into their papers.”

And that small learning community? Hollis is available every day for office hours, encouraging each of her students to visit, talk, explore. “You have a sense that we’re a community,” Hollis re-iterates. “And I like that as a teacher. I have a homebase at FPF.”

Outside of learning, Hollis is committed to helping each student develop his or her own “Berkeley Survival Skills”—something she is well aware of having been a Berkeley student herself. What do you need to know to be successful here? What have you learned that you’d like to share with other people? Are you shy and need help speaking up? Hollis has tips for each need.

“I think it’s important that each student stays engaged with their education by developing a sense of their own strengths and interests.”